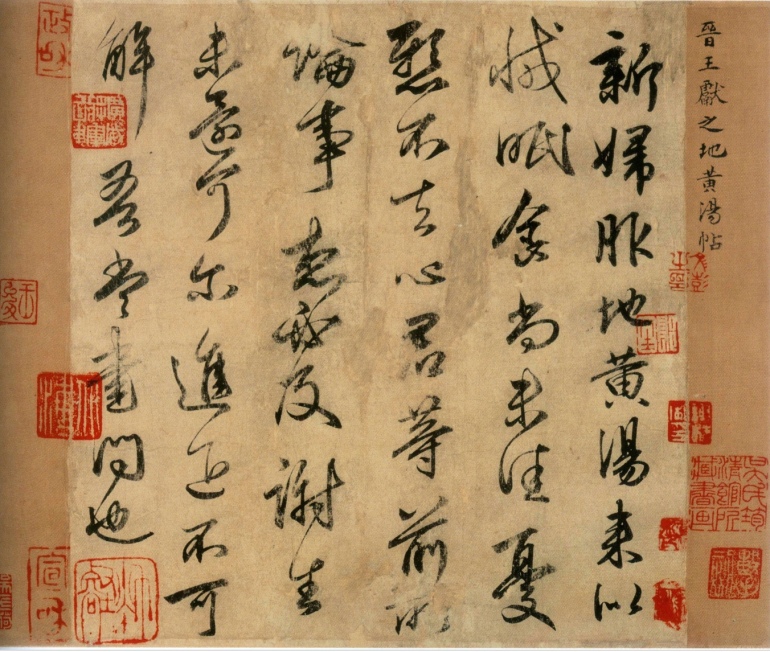 I thought I would print a selection of quotes from Alan Watts book “Tao: The Watercourse Way”. A lot of these kind of ideas I agree with and feel very strongly about such as the fact that modern society is over complicated and doesn’t operate on trust.

“I am of course, puttering about in Chinese literature and philosophy as one who takes care of a kitchen garden as distinct from a big farm, and have the same sort of affection for the literary atmosphere of the Tao – the t3xfs, th3 calligraphy, the paintings and even the Chinese dictionaries – that one might have for a small row of tomatoes or runner beans, and a modest stand of corn.”

This is typical of his attitude which is scholarly but playful and not overly academic. Alan goes on :-

“The Chinese Written Language
t the former is its visusl beauty and its expression ot the
character of the writer
I have practiced Chinese calligraphy for many years, and
am not yet a master of the art, which could be described as
dancing with brush and ink on absorbent paper. Becau
is mostly water, Chinese calligraphy-controlling the low
of water with the soft brush as distinct from the hard pen
requires that you go with the flow. If you hesitate
brush too long in one place, or hurry, or try to correct what
you have written, the blemishes are all too obvious. But if you
rite well there is at the same time the sensation that the work
the
is happening on its own, that the brush is writing all by itself
as a river, by following the line of least resistance, makea
elegant curves. The beauty of Chinese calligraphy is thus the
same beauty which we recognize in moving water, in foam,
spray, eddies, and waves, as well as in clouds, flames, and
weavings of smoke in sunlight. The Chinese call this kind of
理
beauty the following of li, an ideogram which referred origi-
to the grain in jade and wood, and which Needham
“organic pattern,” although it is more generally
understood as the “reason” or “principle” of things. Li is the
pattern of behavior which comes about when one is in accord
with the Tao, the watercourse of nature. The patterns of
moving air are of the same character, and so the Chinese idea
of elegance is expressed as feng-liu, the flowing of wind.
Now this going with the wind or the current, plus the intel-
nally
translates as
ligence pattern of the human organism, is the whole art of
sailing-of keeping wind in your sails while tacking in a con-
trary direction. Buckminster Fuller has suggested that sailors
were the first great technologists, studying the stars for naviga
tion, realizing that Earth is a globe, inventing block and-
tackle devices for hoisting sails (and thus cranes), and under-
stading the rudiaments of meteorology. Likewise Thor Heyer-
dabl (1) in is Kon-Tiki expedition reconstructed the most
primithe salline raft to see where the winds and currents of
the Pacifle would take him trom Peru, and was amazed to
discover how his act of faith was honored by nature’s co-
operation. Along the same line of thought: just as it is more
intelligent to sail than to row, our technology is surely better
advised to use the tides, the rivers, and the sun for energy
rarher than fossl fuels and the capricious power of nuclear”

“Just as Chinee writing is at least one step closer to nature
than ours, so the ancient philosophy of the Tao is of a skill-
fol and intelligent following of the course, current, and grain
of ostural phenomena-seeing human life as an integral feature
of the world process, and not as something alien and opposed
to it. Looking at this philosophy with the needs and problems
of modern civilization in mind, it suggests an attitude to the
World which must underlie all our efforts towards an eco-
logical technology. For the development of such a technology
is not just a matter of the techniques themselves, but of the
psychological attitude of the technician
Hitherto, Western science has stressed the attitude of objec-
tivity-a cold, calculating, and detached attitude through
which it appears that natural phenomena, including the human
organism, are nothing but mechanisms. But, as the word itself
implies, a universe of mere objects is objectionable. We feel
jostified in exploiting it ruthlessly, but now we are belatedly
realizing that the ill-treatment of the environment is damage
to ourselves-for the simple reason that subject and object
cannot be separated, and that we and our surroundings are
the process of a unified field, which is what the Chinese call
Tao.”

I really agree with him that western science stands over the world with a microscope looking down at it. He goes on to talk about positive and negative.

“idealism to cultivate the former and be rid of the latter
flourishes throgour much of the world. To the traditional
way of Chinese thinking, this is as incomprehensible as an
electric current without both positive and negative poles, for
polarity is the principle that + and-, north and south, are
different aspects of one and the same system, and that the dis-
appearance of either one of them would be the disappearance of both.” 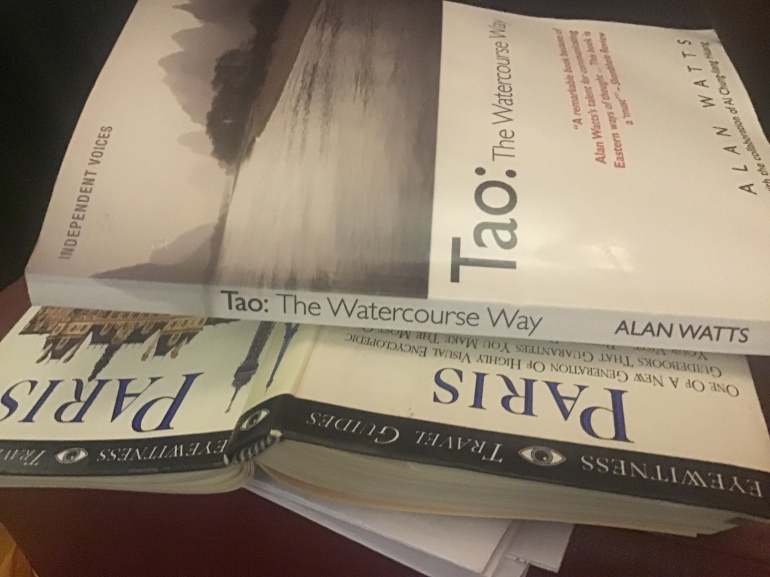 He talks about Judeo Christian culture

“People who have been brought up in the aura of Christian
and Hebrew aspirations find this frustrating, because it seems
To deny any possibility of progress, an ideal which flows from
their linear (as distinct from cyclic) view of time and history.
Indeed, the whole enterprise of Western technology is “to make
the world a better place”-to have pleasure without pain,
wealth without poverty, and health without sickness. But, as
is now becoming obvious, our violent efforts to achieve thie
ideal with such weapons as DDT, penicillin, nucle ar energy,
automotive transportation, computers, industrial farming,
damming, and compelling everyone, by law, to be super-
ficially “good and healthy” are creating more problems than
they solve. We have been interfering with a complex system
of relationships which we do not understand, and the more
of the system
we study its details, the more it eludes us
more details to study. As we try to comprehend and control
the world
situation, a Taoist would ask what it means. What is that
by revealing still
runs away from us. Instead of chafing at this
which always retreats when pursued? Answer: yourself. Ideal-
ists (in the moral sense of the word) regard the universe as
different and separate from themselves–that is, as a system
of external objects which needs to be subjugated. Taoists view
the universe as the same as, or inseparable from, themselves–
so that Lao-tzu could say, “Without leaving my house, I know
The world”

On how to exist in the world.

“The whole universe. This implies that the art of life is more like navigation than warfare, for what is important is to understand the winds, the tides, the currents, the seasons, and the principles of growth and decay, so that ones actions may use them not fight them. In this sense the Taoist attitude is not opposed to technology per se. Indeed the Chuang Tzu writings are full of references to crafts and skills perfected by the very principle of “going with the grain”. The point therefore is that technology is destructive only in the hands of people who do not realise they are one and the same process as the universe. Our overspecialisation in conscious attention and linear thinking led to neglect or ignore-ance , of the basic principles and rhythms of this process of which the foremost is polarity.”

“Only recently have the Chinese set their hearts upon some kind of utopia, but this must be understood as the necessary reaction to years and years of foreign exploitation, anarchy and extreme poverty.”

“If there is anything basic to Chinese culture, it is an attitude of respectful trust towards nature and human nature- despite wars, revolutions, mass executions, starvation, floods, droughts, and all manner of horrors. There is nothing in their philosophy like the notion of original sin or the Theravada Buddhist feeling that existence is a disaster. Chinese philosophy, whether Taoist or Confucian or, one hopes, even Maoist, takes it as a basic premise that if you cannot trust nature and other people, you cannot trust yourself. If you cannot trust yourself, you cannot even trust your mistrust of yourself – so that without this underlying trust in the whole system of nature you are simply paralysed. “

“What we are beginning to get at here is a view of the universe which is organic and relational – not a mechanism, artefact or creation and by no means analogous to a political or military hierarchy in which there is a Supreme Commander.”

“Pick up a blade of grass and all the worlds come with it. In other words, the whole cosmos is implicit in every member of it, and every point in it may be regarded as the center. “

On efforts to improve the world

“Remembering that Chuang Tzu exaggerates to make his points, the practical message seems to be that only trouble is made by those who strive to improve themselves and the world by forceful means. “Ah,Liberty – what crimes are committed in thy name!” The idealism of the French, American and Russian revolutions has always
, sooner or later, led to excesses of violence which are justified as being for the liberation and welfare of the people’s molested. “

On a society not based on trust…

“Hinders productive work by demanding so much accounting on paper that the record of what has been done becomes more important than what has actually been done. About this one might go on and on – but in the current anxiety concerning overpopulation, pollution, ecological imbalance and the potential disasters of nuclear fission, it is only seldom recognised that governed nations have become self destroying institutions paralysed and bogged down in their own complications, and suffocated beneath mountains of paper. The Taoist moral is that people who mistrust themselves and one another are doomed.”