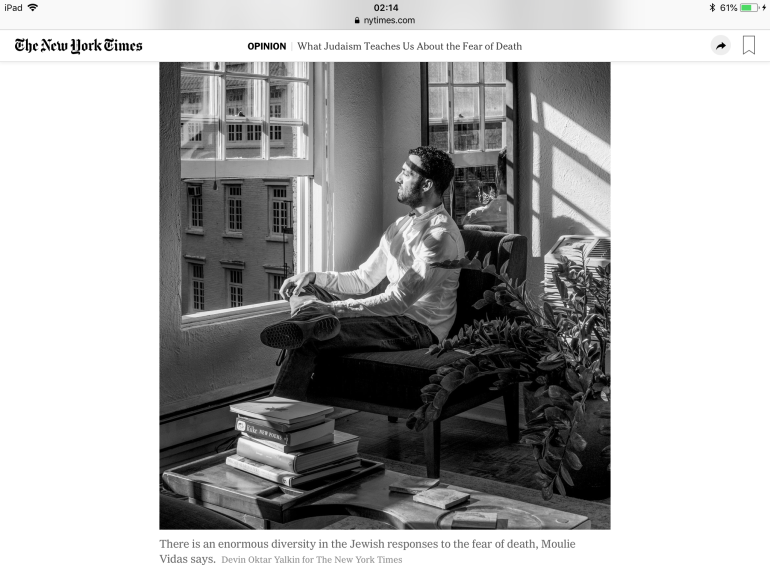 I read this this article in the New York Times:-

The article itself was kind of a dry recitation of Jewish theology over 5 millennia. I was hoping the article would tell me something about how to deal with thoughts of death, but no. Boring.

I was drawn to the first picture above. A young scholar in a prestigious university, gazing out of a slightly open window, dappled sunlight coming through. He is intelligent but casual (he wears sneakers). A small pile of books is on the coffee table. The most visible is the collection of Rilke suggesting good taste and spiritual discernment.

Its like a vision of a life I never quite managed to achieve and maybe one a lot of real life academics don’t achieve. Generous rooms filled with books, time languidly passing by. All the time in the world to read and to write.

I also nearly got into my countries version of the Ivy League at age 18. I was interviewed by the academic, then a famous TV literary critic. For whatever reason I failed to impress.

A few years ago I went to Maynooth University in Ireland. It was a theological training centre but since the 2000s the University of Ireland has built a PFI university there.

Now large parts of the world are in their own retreat. Some have time to read and stare out the window. Some are no doubt frantic about how to get food and medicine.

I feel like growing up how misleading films are about life. Films like 4 Weddings or Maurice or even Lost in Translation. That we will grow up and have an interesting career and a gaggle of amazing friends. Just go to university and come out the other side with a plush job, fully furnished life.

Instead in narrow-minded-irl-Britain. Expensive self containment apartments. Junk food and junk debt.

Yes so I would like to escape to one of these ivory towers where journalists come and seek my opinions.

Life should be appreciated. I just feel I like in identikit supermarket world rather than a world on intellectual (or ontological) sophistication.